Residents lament over hiked sachet water price in FCT, others

“Water, water everywhere and not a drop to drink,” is a popular quotation from Samuel Taylor Coleridge’s poem, ‘The Rime of the Ancient Mariner’ (lines 115–126), published in 1798 in the first edition of Lyrical Ballads, but which decries the fact that water is around us, but is often not clean or safe enough to drink.

The expression above is evident in the situation of the country as millions of Nigerians rely on unsafe and unhygienic water gotten from wells, streams, rivers, boreholes and other sources in different states across the federation, leading to outbreak of different diseases, including cholera, diarrhoea.

On August 27, the Nigeria Centre for Disease Control (NCDC),  in its weekly epidemiological cholera situation report 10, Epi Week 33: 16 – 22 August, 2021, disclosed that Nigeria is hard-hit as 2,035 died of cholera in 23 states, including FCT, with the Minister of Environment, Mohammad Abubakar, and Director-General of the NCDC, Dr. Chikwe Iheakweazu, warning that Nigeria will continue to experience large cholera outbreaks in the absence of clean water, poor sanitation practices and open defecation.

Just like prices of goods and services have been skyrocketing on a daily basis across the country, the Association of Table Water Producers (ATWAP), in a notice on September 30, after its meeting, stated that it has imposed an increase due to rising production costs.

According to the notice, instead of N100 or N120 for a bag of water containing 20 sachets of 50cl packaged water, factories will now sell a bag between N180 and N200, depending on the quantity bought, while resellers, such as cold room operators, may sell at N240 per bag.

Investigations reveal that many food vendors no longer serve sachet water to customers, but ask them to buy either at N20 per sachet or a bottle of water at N100, with many residents sourcing for empty bottles to fill with water, often unhygienic, before leaving home to face their daily businesses.

A statement made by an ICT consultant, Mr. Ezekiel Osaze, in which he stated that apart from the increase in price of sachet water, the quality is a major concern as some of the packaged water are even hazardous to health.

He said:  “Actually, I have never experienced this issue of high inflation in Nigeria, but both the government and businessmen have played critical roles. Nigeria is in abject poverty. There is high inflation, poor infrastructure, insecurity and high rate of unemployment everywhere you go.

“Even the purported increase in price of pure water is ridiculous, because people are paying more for avoidable sicknesses. For instance, I bought a sachet water yesterday in Wuse, but the dirt in the packaged water was more than the vomit of a new born baby. NAFDAC should take note of pure water factories and sanction those operating in dirty environments. Some of the pure water you see being hawked around are not actually pure, especially when defrost. Meeting the mainstream of hygienic water sachet production is more important than increase in prices.”

Also, a business developer, entrepreneur and travel consultant, Mrs. Adekunle Damilola, said the increase in price of sachet water is just another example of how cost of living is rising in different parts of the country.

She said: “Since I was born, I have never experienced an increase in prices of foods and other commodities the way they are now. I don’t know how much a bag of pure water is in your area, but it’s N250 in Gwarinpa and N20 per sachet. The producers say they have been running at a loss and I agree with them because the production cost is very high, in terms of labour and materials. However, pure water is not the only thing that has increased in price.

“Apart from that, landlords have increased their rents, while school fees have also been increased. Yet, salary is not being increased by employers of labour. Furthermore, cooking gas is now N700 per kg. The concern is that, with the increase in sachet water price, many will take to drinking any available water they see, thereby risking diseases as they won’t even have money to buy gas or kerosene to boil the water, especially in rural areas of the FCT.”

In an interview, the CEO of Freedom Table Water, located in the Jahi area of the FCT, Mr. Theophilus Ibekwe, said people should not complain much about the increase in price of sachet water as many will not understand the losses they incur except they venture into it.

“How much is the capsule used to print one tonne of nylon? It’s priced in dollars for the importers and they transfer the cost to the producers. Then add cost of rent, electricity, packers, filters, drivers, motor boys, government shake down and distribution. To be honest, even at N200 per bag, producers will still suffer. The profit, compared to asset depreciation, is not worth it. Take it from me, it is when you enter pure water business that you will receive sense, understand Nigeria and accept God as your Lord and personal savior.

“Those complaining about the hike in price should take many things into consideration. Diesel in January was N180, but it’s now N300 per liter, but you still want us to sell like we used to do before? You need to know what it entails to run a sachet water factory before you will understand why the price was increased. To be honest with you, sachet water has overstayed at N10 per sachet or N100 per bag, because we have been the ones losing, especially here in Abuja.” 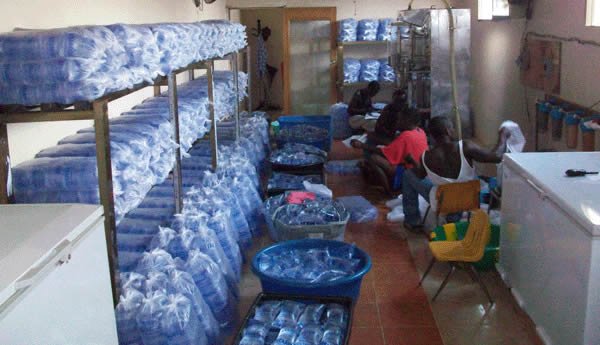 Speaking to reporters in August, the president of the Nigerian Medical Association (NMA), Prof. Innocent Ujah, said cholera was a disease of poverty and underdevelopment and appealed to the federal government for urgent intervention as a study by the Nigerian Institute of Medical Research (NIMR) revealed that no state in Nigeria, including the FCT, has 24-hour running water.

He said: “Anywhere there is cholera, it is caused by underdevelopment. In Nigeria, water is a major problem; clean, potable water is not available to all. If you map the country, you’ll find out that the places where there are outbreaks of cholera are underdeveloped areas where people do not have water to drink and people fetch water from dirty places and drink.

“Also, because of open defecation during rainy seasons, all those faeces will then be washed down into the stream and people drink from some of these streams. It’s largely as a result of dirt and it’s very sad. Clean running water is a big problem in almost all parts of the country.

“I say so because when I was the director-general of Nigerian Institute of Medical Research (NIMR), I tried to do a study of the state capitals of the country that has running water supply for 24 hours and there is none, including the FCT. If we look at all the indices, it points to the fact that we created the environment for such disease. Cholera is an infectious disease.”

ABUJA BEHOLD; THIS IS HOW YOUR WATER IS TREATED.